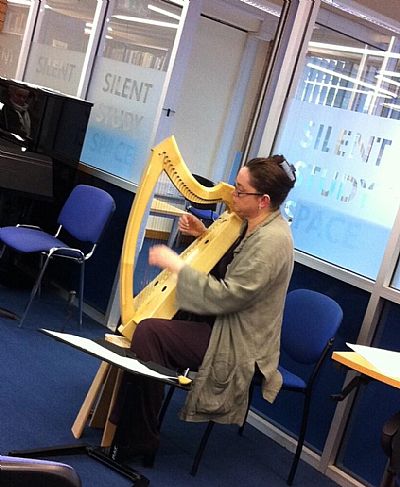 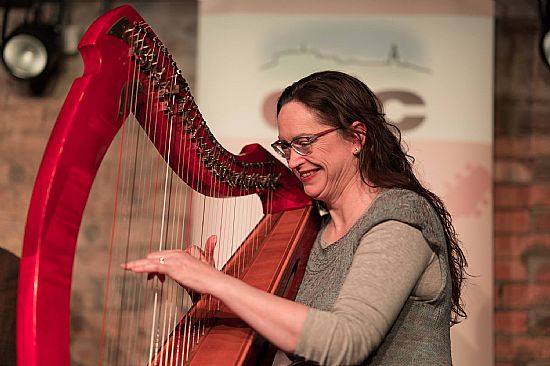 Karen Marshalsay is one the few modern players using fingernail (as well as finger pad) technique on gut and wire-strung clarsachs (Scottish harps), bray harp and Paraguayan harp, specializing in the traditional music of Scotland and Latin America, and her own compositions.  Her playing has developed through the folk world of feisean, festivals, workshops and instruction from such leading players as Bill Taylor and Alison Kinnaird (Scottish) and Bill Morgan and Rito Pedersen (Latin American). Karen received a Distinction in her LTCL recital in 2010 - the first time this has been awarded to an all Scottish traditional repertoire. She is currently the wire harp tutor at the Royal Conservatoire of Scotland.

The acclaimed Russian String Orchestra (Misha's Gang) conducted by Misha Rachlevsky performed two of her works, The Road to Dalginross and The Girl with the Purple Harp in new orchestrations by Karen for harp and string orchestra, in four concerts in the Edinburgh Fringe in August 2018 with Karen as guest soloist. She joined them again in August 2019 for several concerts with a new March, Strathspey and Reel set orchestration including Karen's tunes Isabel Gow's Welcome to Edinburgh and The Rhymer's Reel, and a reprise of The Girl with the Purple Harp.
Karen was Composer in Residence with Harps North West for 2015-16, writing a new piece for harp ensemble, The Lay of the Land, which was premiered on 11 December 2016.
The Road to Dalginross for string quintet was performed by Mr McFalls's Chamber at the Tolbooth Stirling in April 2016 as part of the Distil Showcase.  Karen had previously been invited to take part in a Distil weekend mentored by Greg Lawson and Jim Sutherland the previous October.
Karen's involvement with Distil, an initiative funded by the SAC and PRS Foundation as a retreat course for traditional musicians active in composition, began with Distil 2 in March 2003 when the tutors were Tom Bancroft, Dave Heath and Dick Lee. This led to a rehearsal in 2004 of a short piece for chamber ensemble entitled Culross, based on music from the 1635 Scottish Psalter. A new piece based on the story of Thomas the Rhymer was premiered under the musical direction of Rick Taylor in the Distil Showcase on 20 October 2006 at the Tolbooth, Stirling. This featured a string section along with border pipes, accordion, soprano sax, bass clarinet, modern clarsach and bray harp.  A second piece, Winter Sun, in a more classical style, was performed by Mary McCarthy (piano) and Colin Steele (trumpet) at the Distil Showcase in November 2008. Karen has also written for the bray harp in a new piece The Forth Bridge, which was performed by Karen and Mr McFall's Chamber on 23 October 2009.

As part of the prestigious Celtic Connections New Voices series Karen’s commission Journeying, written for three harps (Karen was joined by Bill Taylor & Heather Yule) and two percussionists (Davy Cattanach & Keith Bleasby) was performed at the Glasgow Royal Concert Hall on 31 January 1999 to critical acclaim.  The piece was performed again in Glasgow Cathedral as part of Celtic Connections 2000, along with new works Promises to Keep and The Neo Gosteg, for harp and fiddle, (performed by the composer, Bill Taylor and Iain Fraser on fiddle).

Ida y Vuelta, for solo harp, was commissioned by the Northborough Harp Festival 2001 (later known as the  Stamford Harp Festival), with assistance from the Arts Council of England.