Karen's album The Road to Kennacraig is now available on Bandcamp as a CD and digital album. And on July 3rd Bandcamp are having a Free Friday which means they are giving 100% of sales direct to the artist without taking any fees. So if you're interested in the album now would be a great time ...

There is a Lockdown O'Carolan Challenge running in the Facebook Celtic Harp group - the initiative of Asya Sergeeva. Tune numbers were randomly assigned from the Donal O'Sullivan book and Karen drew number 97 Mr Malone. It's not one that's heard very much if at all, so check out her version on YouTube.

** Update 2nd July - CDs are now shipping. Look out for news on books and pdfs soon! **

Due to the necessary lockdown in the UK to tackle the current pandemic I have suspended all sales of CDs and books for the time being. While post offices are still open at the minute I don't feel that these are essential items and do not want to expose anyone in the royal mail supply chain to unnecessary risk, and feel that we should only post absolutely essential items for now.

The CD can be downloaded from iTunes, Google Play Music, Amazon (UK), and Amazon.com (US), and can also be streamed on Spotify and Apple Music.

The wire harp music packages (pdf score and mp3s) are still available as these are instant digital downloads, but all other sheet music books and scores are on hold at the minute.

Let's all keep our communities safe!

20 March 2020ALL GIGS AND WORKSHOPS POSTPONED

Like everyone else in this strange time all gigs, performances, and workshops have been cancelled for the next few months anyway. Let's all stay safe and at home and support the NHS and hopefully live music will be out and about again later in the year. If you'd like to join my newsletter for any updates about anything that might be going on (at a good social distance!) such as livestreams please subscribe here. We are hoping to reschedule the cancelled events in October/November and details will be on here and in the newsletter.

Thanks. Stay safe everyone and wash your hands!

Karen will be teaching a workshop for the Glasgow Branch of the Clarsach Society on Sunday 8 March 2-5 (doors open 1.30). There are two tutors and two groups divided by level and both groups get an hour with each tutor then come together at the end. The venue is Nuffield Health Centre, Strathblane Road, Milngavie. Cost £10 and non members welcome.

Karen will be playing a solo harp concert in The Manor House in Ilkley on Saturday 28 March (times tbc probably 7.30-9.30) - a rare chance to hear all three Scottish harps in an intimate acousting setting. She will teach a day workshop for Transpennine Harps in Burley in Wharfdale Library on the Sunday.

Update - these events have been postponed due to the coronavirus outbreak and will hopefully be rescheduled in October/November.

Having lived in Greenock for several years after leaving school, and having played Beacon Arts Centre with The Cathal McConnell Trio two years ago Karen is looking forward to returning to Greenock with her solo album tour gig.

Leading harper Karen Marshalsay plays at Birnam Arts Centre on Saturday 25th January in a concert that has been rescheduled from November following a family bereavement.

Karen, who’ll be playing music from the album she released last summer, The Road to Kennacraig and possibly some appropriate tunes for Burns Night, arrives in Birnam almost direct from the Celtic Connections festival in Glasgow, where she’s appearing as part of Irish music legend and Boys of the Lough founder, Cathal McConnell’s trio.

She’ll be playing three different harps, which provide contrasting sounds. As well as the familiar gut-strung clarsach, which is the most popular harp among traditional musicians and folk bands, Karen will bring the wire-strung harp from the Gaelic tradition and “the beast” – a bray harp whose buzzing, sitar-like tone often takes audiences by surprise.

“When people think of the harp, they probably imagine this sweet-sounding instrument, and that’s what I’ll be playing mostly,” she says. “The bray, on the other hand, was designed to cut through the hubbub of dances and gatherings in castles during the fifteenth and sixteenth centuries when harp players were the ceilidh band leaders of the day. Each string has a bray pin – a small piece of wood – that gives this buzzing effect and makes the instrument louder. If you put that together with a crumhorn and a tabor, or hand drum, that would have been the band that people danced to back then.”

Karen has worked with Indian, African and Paraguayan musicians, as well as leading “Celtic” musicians including Cathal McConnell, piper Allan MacDonald and Shetland fiddler Jenna Reid, but The Road to Kennacraig focuses on the Scottish aspect of her playing. All the music on the album is either traditional or written in the traditional style, with around half of the tunes being Karen’s own.

The Cathal McConnell Trio are playing Celtic Connections on Tuesday 21 January 8pm in the Strathclyde Suite, with support from The Canny Band. 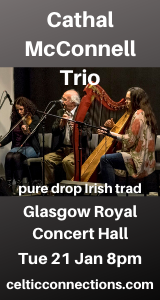 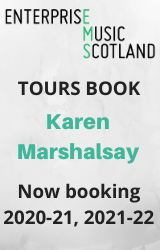